What is the aim of TARDIS?

Why should we send dry aquatic invertebrates into space, an environment that certainly is not normal for these animals? There are many answers to this question. One would be: to see if these animals, as the first ever, are able to cope with the extremely dry conditions of deep vacuum and the harmful solar and galactic radiation up there. In the past, several biologists have suggested that tardigrades may be one of the few animals that have a chance to come back alive after a trip in real space. Finally we will be able to find out if this is true.

At a more mechanistic biological level, exposure of organisms to space conditions will reveal how living cells react to the potentially very stressful impact of space parameters. And organisms that can handle the damaging space parameters will be important sources of knowledge for how to generate the space ecosystems that will be necessary for the more permanent human establishments in space that is envisaged today.

The TARDIS experiment consists of two sets of samples: one set exposed to both space vacuum and solar radiation, and another set exposed to space vacuum only. All tardigrade specimens included in the study are in a dry, anhydrobiotic state. Species included are: Richtersius coronifer, Milnesium tardigradum, Echiniscus testudo, Ramazzottius oberhaeuseri. These are all known to be very tolerant to desiccation.

Once on the ground again, these samples will be analysed for survival and reproductive potential, and for damage on DNA. 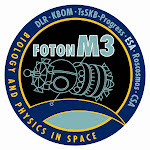 Facts about the FOTON-M3 mission

Tardigrades No. 1 at Wired Science!

The space tardigrades have been listed Number 1 on "Top 10 Things Launched into Space in 2008" at Wired Science http://blog.wired.com/wiredscience/2009/01/top-10-things-l.html. The tiny tardigrades left behind such big things as the Jules Verne Automated Transfer Vehicle (with a size of a double-decker bus), and the Fermi Gamma-Ray Space Telescope.

At last, the first results from the TARDIS experiment have been published! Thank you all for waiting patiently during the analysing and publishing process! Many of you have probably read already about the results in news media, and I apologize for being so late with updating my blog. The main reason has been a very heavy work load from answering questions from media all over the world. Fun but time consuming.

YES, indeed many of the tardigrades survived the trip in space, and a few of them became the first animals to return alive after exposure to both space vacuum and solar radiation.

To recall our report in Current Biology, the space vacuum and cosmic radiation did not affect their survival or reproduction at all. This was true for both Richtersius coronifer and Milnesium tardigradum. What this means is that these animals can either protect their cells from expected damage of the extremely dehydration impact of space vacuum, or that they can repair damage that arise in some way. At the moment, we don’t know which is true.

Some of the samples were exposed to solar light (UV-radiation) in addition to space vacuum and cosmic radiation, and we used two different optical filters to discriminate between the combined effect of UV-A and UV-B (280-400 nm), on one hand, and effects of the full spectrum of UV, including also UV-C and Vacuum-UV (116-400 nm). Obviously, UV-radiation is difficult to handle also for tardigrades, since few animals survived these exposures.

But one of the species, Milnesium tardigradum, did better than the other, and about 12 % of those exposed to UV-A and UV-B managed to recover, although their egg production was lower than in the control animals that stayed on Earth. Also a few specimens exposed to the full UV range woke up and tried to get their bodies in shape again, but failed and died a few days later.

As almost always in science, our experiment gives rise to more questions than answers. How could these animals stand the extreme dehydration by space vacuum (at a pressure in the range of 0.00001 Pa compared to 100 000 Pa on Earth)? How could some of the tardigrades survive a dose of UV-A and UV-B of over 7000 kJ/sqm and still produce offspring? What molecular mechanisms are behind these remarkable achievements? To what extent do different wavelength of UV radiation penetrate the tardigrade cuticle? Why did one of the species better than the other? Etc, etc.....

A lot of laboratory work are now waiting to be done in order to reveal the secrets of the physiology of tardigrades. I hope that the work with sequencing of the tardigrade genome will start soon, because it will be of great help.

I am of course amazed by the results from our study. But perhaps I am even more amazed by the interest in our project from the public . Most scientific reports don't make it to the front pages of newspapers and web-sites for science news. Most reports never reach the public at all. Tardigrades are definitely special, not only in their physiology, but also in the way they catch the attention of people. Is it perhaps the contrast between the great biological achievements by these animals and the tiny body they have? Or the challenging of traditional concepts of life, for instance that "life depends on water", "life is a continuous process"? Whatever the reason, I hope that tardigrades will continue to inspire people, and make them interested in the world of biological diversity and evolution.
Upplagd av K. Ingemar Jönsson, Docent på Monday, September 29, 2008 1,013 comments:

An important step towards a greater recognition of tardigrades as potential biological model organisms was recently taken by the National Human Genome Research Institute (NHGRI, USA), when they decided that the whole genome of a tardigrade (Hypsibius dujardini) should be sequenced within the next few years. Needless to say, this will open up a wide range of possibilities to go deeper into the genetics and physiology of tardigrades, including investigations that may eventually solve the mystery of the extreme tolerances of these animals.

So there is much to look forward to if you are interested in these animals!!

The hardware with TARDIS samples has now been returned to the Swedish laboratory. No damage could be observed so the hardware part of the experiment worked fine. The software part, i.e. the tardigrades, will now be examined, and this will take a few months. Survival of exposed and non-exposed animals will be monitored , and reproduction patterns recorded. And the analyses of damage to DNA will soon be initiated. When all these analyses are ready, we will know if these pioneer tardigrades were able to stand their trip through space.
Upplagd av K. Ingemar Jönsson, Docent på Thursday, October 04, 2007 123 comments:

Tardigrades are back on Earth!

This morning, at 9:58 CEST (Central European Summer Time), the FOTON-M3 capsule carrying the TARDIS hardware landed as expected in Kazakhstan, near the Russian border. Apparently, everything went as planned, and I hope this goes also for the TARDIS. More about this latest news from ESA can be read at http://www.esa.int/esaCP/SEMFVO6H07F_index_0.html. The launch of the rocket carrying the FOTON capsule can now also be viewed at http://www.esa.int/esaHS/SEMVIOK5P6F_research_0.html.
Upplagd av K. Ingemar Jönsson, Docent på Wednesday, September 26, 2007 391 comments:

View the satellite carrying TARDIS on the web!

Today I learned that the position of the FOTON-M3 satellite can actually be viewed in real time.
So if you happens to be at a location where it passes during the night, and if the sky is clear, don't miss the opportunity to see the satellite carrying the first tardinauts in history!

Last Friday, the FOTON-M3 satelite was successfully sent into orbit, and the Biopan-6 platform was opened, exposing tardigrades of the TARDIS experiment to open space. The satelite will now orbit the earth at a 90 min. interval until 26 September, when the FOTON capsule hopefully lands in an area near the Kazakhstan-Russian border. Read more about the FOTON-M3 mission at http://www.esa.int/esaCP/SEMQDB13J6F_index_0.html
While waiting for the tardigrades to complete their trip in space, you may want to find out some more about tardigrades. Here are some great sites on the web:
Tardigrade Newsletter
Martin Mach's Monthly Journal on Tardigrada
Goldstein Lab
Upplagd av K. Ingemar Jönsson, Docent på Monday, September 17, 2007 152 comments: